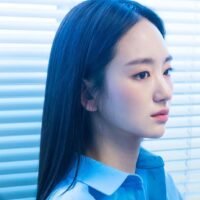 Won Jin Ah is a South Korean actress under Yooborn Company. She dreamed of being an actor but didn’t pass the entry exam and chose instead to study cultural planning. She eventually dropped out after a year and did a string of odd jobs to support her family, including at a postpartum confinement center, but her parents encouraged her to move to Seoul so she could have a better chance at fulfilling her dream.
She first appeared in the short movie “The Chosen: Forbidden Cave” (2015) after passing an audition, soon followed by “Now Playing” (2015). She then landed a minor role in Kim Ji Woon’s period espionage film “The Age of Shadows” (2016), but it was for her convincing performance as a North Korean girl in “Steel Rain” (2017) that she was first noticed by the public.